Billy and Flash, Flash and Billy.

Billy and Flash, Flash and Billy, two of the loveliest blokes one could ever meet. I first met these two lads whilst at Gwebi Agricultural College, sometimes known as College of Knowledge while studying for my agricultural diploma. Without a shadow of a doubt it was the happiest time of my life. However, into each life comes a touch of sadness no matter how idyllic other things may be. ‘We had joy, we had fun, we had seasons in the sun, but the rhythm and the rhyme were but seasons out of time’. (Rod McKuen). Please bear with me as I try to explain a little about all this.

Sport played a big part of our lives and although I was now deaf courtesy of my short stint in the Rhodesian Army I still remained an ace cricketer. Well I was. So herewith the college cricket XI and from there we can proceed.

Now before we progress any further the lads names as we knew them.

You dig now? Now Chunky and Flash were brothers, Chunky being the eldest one. For the life of me I do not know why Flash has short hair here as I can only remember him with long, flowing locks? Left of Flash is Billy, which is about what this post is about. They were the best of friends and considered themselves Casanovas of note but, more on that later.Django, was actually the Ladies delight, loved him they did, sighs. Our two opening bowlers were, ‘I’ve got a pistol’, and ‘hit’em with a whipcord cocky’. Fast like. Followed by Captain Thomarse, also fast like, and the man for all seasons as could bat a bit too. Chunky, provided the medium pacers taught from a Green Fowl School consisting of very slow long hops. I was the off spinner occasionally followed by Pops also a spinner. Took an awful long time for his balls to reach the ground. The other guys did a bit of this and that, mainly that. Flash’s forte was fielding in the gully where the opposing batsmen would latch on to a loose ball and send it crashing through there. Heading straight towards Flash’s head who was completely oblivious to it. As it was about to hit him in the face the others would shout Flash. Suddenly Flash would wake from whatever reverie he was in and some truly amazing catches were held by him, God alone knows how? He became the Colin Bland of Gwebi fielding. Chimimba was our wicket keeper. Poor old bloke was of a portly nature, so on the first ball of every match, as he bent down his pants split each and every time, but he made up for it being an ace bat. Pity him and Thomarse never seemed to come off and it was left to the other lads. Poor old Billy, had been hit in the ‘goons’ (fambly jewels) earlier on and was actually hospitalised for awhile so the poor old bloke was very reluctant to field close to the bat. I kept on having to tell him, ‘I don’t bowl loose balls mate, now move in closer’. There was more to the College than sport so off to the old lecture room.

We had a visiting lecturer from the Kutsaga (Tobacco) Research Station named Turville Kille. I always quite liked him until he came to lecture us. Had a terrible temper on him, so whilst lecturing us he explodes. ‘I have never and and I mean never come across such a bunch of bloody baboons masquerading as young men in all my life’. And so on and so forth. Throughout all this time, Flash, sitting in the front row is leafing through his file, backwards and forwards completely oblivious to anything else as is par for the course with this boy. Kille suddenly notices him and goes beserk with rage. Flash just stares at him. Losing it completely now, Kille orders him out the class. Flash in his usual dwaal just looks at him and complies whilst packing his stuff away. Once out the door, Kille suddenly looks aghast and says, ‘that wasn’t the deaf boy was it’? Raucous laughter followed. TSUH. 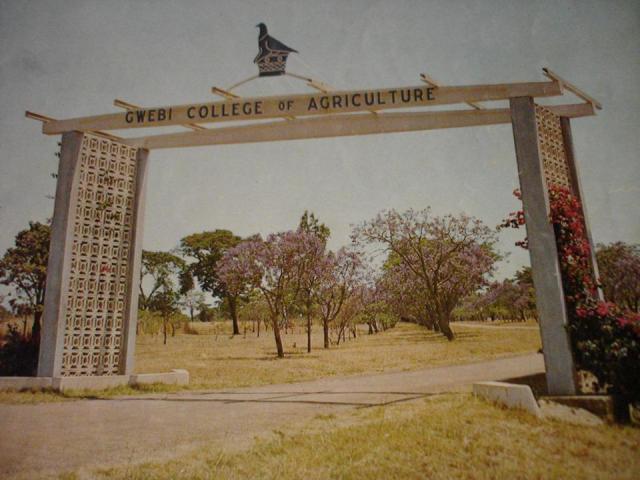 Quite simply beautiful. Now Billy, Flash and Spook are sitting in the pub Mundy’s Folly enjoying a quiet drink before supper. Billy and Flash are giving Spook a hard time saying, ‘in all the time we have known you we have never seen you with a bird’. They are trying to make out that they are the big Casanova’s and all, again. I retaliate by saying, ‘look I’m not interested in women at this time, it’s more important with my circumstances to try and make friends here with the lads’. They are both derisive which annoys me so I go into attack mode. ‘I’ll tell you what, the next time you two lads go to Club Tomorrow, I’ll come with. Then between the both of you, you choose whoever you think is the best looking bird there and then I’ll get off with her’. Once again raucous laughter and derisive from the two lads and a $10 wager is laid. The great night arrives and spruced up and looking in our prime we head to Club Tomorrow. Billy and Flash case out the joint and make their decision and inform Spook. Spook has been casing out the place as well and disagrees with them and says, ‘what about that one then’? Once again both lads break out in laughter, hooting with derision and the ante is raised to a whopping 50 bucks. Spook moves into action, well he swayed like an Angel swayed, well he moved like an Angel moved. Took about 5 minutes and she was eating out of my hand. Billy and Flash are flabberghasted, non plussed and still cannot get off with anyone including all the dogs there. Spook is groovin’, ‘don’t f**k with me lads’. So we all head off to Barney’s, maybe their luck will change there? Pigs might fly and all. Just before it’s time to leave the chick tells Spook her boyfriend is in the Army and is bigger than him. On principle I never went out with her again, I don’t get off with chicks who’s boyfriends are risking their lives in the bush, noSir, noSireeeeeeeeeeee.

SEASONS OUT OF TIME.

Into every life there comes a time of sadness. I forget the sequence now, but, I think it was Billy, then Chimimba and then Flash. Billy was killed in cold blood by savages masquerading as terrorists or freedom fighters as they called themselves. Chimimba and Flash were both killed in car accidents, oh no, oh no. I’ll try and put down what Billy’s Dad wrote which made front page news in the Rhodesia Herald newspaper kindly sent to me by his brother Iain. Well worth the read. 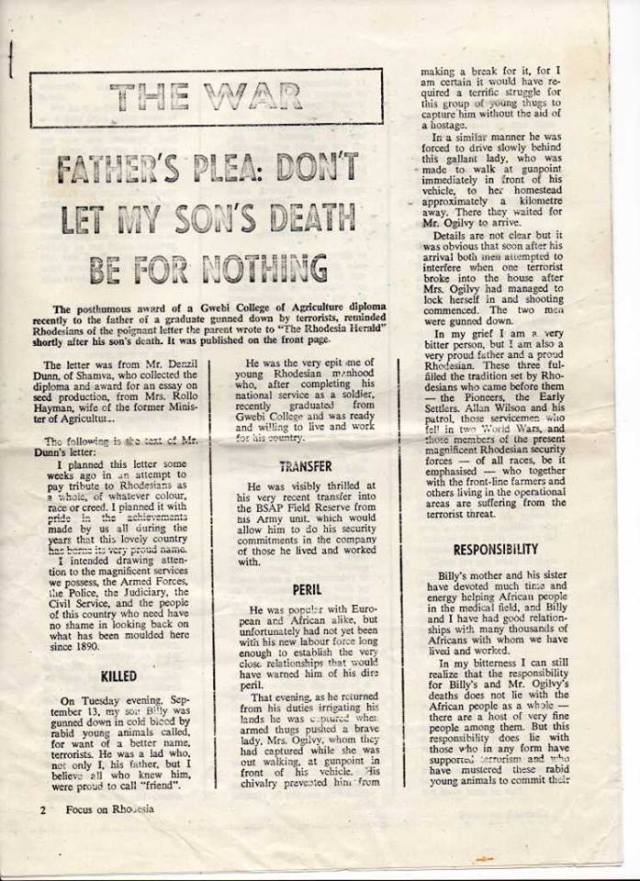 And the next page. 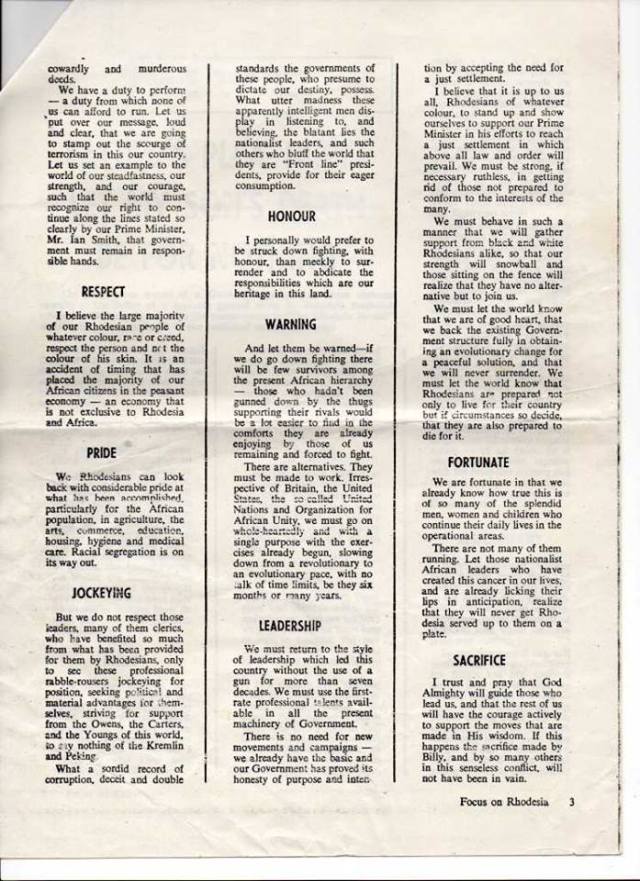 The saddest thing of all about all this, is, the free world opted for the terrorists and sold Rhodesia out, but, they forgot one thing. You can never erase our memories and the wonderful times and friends we had.

I'm a 61 year old happily married man with three grown up children. I lost all my hearing as an eighteen year old whilst doing National Service and then had a Cochlear Ear Implant twenty years later. I love trying to explain these things to people and bits about my life. I never thought so at the time, but it was the best thing that ever happened to me. Thus one gets Random ramblings from a man who has seen a lot with a touch of humour underlying all.
View all posts by spookmoor →
This entry was posted in Books, Poetry & Writing, Business & Work, Culture & Society, Education, Family and Relationships, Farming, Politics, Relationships & Family, Sports & Recreation, Topics, Uncategorized and tagged agricultural college, agricultural colleges, agriculture, Colin Bland, commercial farming, cricket, cricket legends, cultural differences, Gwebi Agricultural College, hard of hearing, honesty, humour, lip reading, mental health, Rod McKuen, sports. Bookmark the permalink.

46 Responses to Billy and Flash, Flash and Billy.